I recently visited a local farmers’ market with my friend and colleague and his daughter, who is finishing up her senior year at Florida State University. His daughter was shopping for groceries to take back with her after spring break.

Food services at schools and universities have always left much to be desired. So, I’m encouraged to see young people, like my colleague’s daughter, seek out clean, locally sourced foods.

I highly recommend buying most — if not all — of your produce from a local farmer’s market. And if you don’t have access to a nearby farmers’ market, shopping in the organic aisle at your local grocery store is the next best option.

No matter where you choose to get your food, there are a few key things you should know when deciding what to put into your basket or cart.

For one, as I’ve reported before, food labels aren’t always “what you see is what you get.” Many food manufacturers exploit loopholes and loosely label their product as “organic.” That’s because manufacturers and farmers have found adding that one little word to a product label can make profit margins soar.

So, big food manufacturers now spend a ton of money trying to influence the USDA’s definition of the word. In fact, they spend more money advocating for these mealy-mouthed legal manipulations than investing in actual safe, organic crops. In my view, big food has as much control over the USDA as big pharma has over the FDA. I found out first hand when former Sen. Tom Harkin (D-Iowa) nominated me to serve as FDA Commissioner in 1996.

As you may recall, in July 2016, Vermont passed a landmark bill to force food producers to label products that contain GMOs. The Vermont law even prompted some major companies to add GMO labels onto — and in some cases remove GMO ingredients from — their products sold nationwide, not just in Vermont. This was a huge win for the consumer base.

But then, the big, crony, capitalist federal government stepped in and ruined it all — again.

In August 2016, President Obama signed a federal GMO labeling law, allowing companies to inform consumers in one of three ways whether a product contains a GMO. First, they can present the information on the product label, which is how the Vermont law worked.

Or, they can share GMO disclosures in barcodes that you must scan on your smartphone. Worse yet, the law even allows food makers to print an 800 number on the package, so consumers would have to make a phone call for more information.

So, now, in most grocery stores nationwide, we’re back to square one. With no clear, easy labels that tell us which products contain GMOs.

Why are GMOs such a problem?

GMOs began entering the market about 20 years ago in response to agro-giant Monsanto’s development of glyphosate (Roundup), a toxic chemical that wipes out unwanted weeds and pests, and every other natural botanical life form.

Of course, glyphosate also kills conventionally grown crops. So, Monsanto began altering the genetic structure of seeds, so they could withstand the toxic effects of glyphosate. Today, the farmers can spray glyphosate all over their genetically modified (GM) crops, killing every weed and pest in sight.

Turns out, glyphosate also kills the bees, butterflies, and birds — Nature’s pollinators. Thus, the genetically modified “plant” is free to grow without any natural competition.

There are also many serious concerns as to how consuming GMO’s can affect your health directly. I’ll cover this at length in a future issue of Insiders’ Cures, my monthly newsletter, so stay tuned! (If you’re not yet a subscriber, now’s the perfect time to get started!)

7 ways to rid your shopping cart of GMOs

According to the Grocery Manufacturers Association (GMA), about three-quarters of the foods we eat today contain GMOs. Plus, more than 90 percent of all corn and soybean cultivation is GM. Other popular GM foods include alfalfa, apples, canola, potatoes, sugar beets, and summer squash.

Fortunately, following these simple guidelines can help you avoid GM foods and pesticides, regardless of what the labels say — or don’t say!

1. Choose organic, but with caution
I always advise avoiding all processed and packaged foods in general. (However, if you do choose to purchase packaged foods, avoid anything that contains regular corn or soy — more on that in just a moment.)

You can also opt for organic foods which, by definition, cannot contain GMOs. But, as I alluded to earlier, many of the designer, organic foods on supermarket shelves are a waste of your money. And just because something has the organic label doesn’t mean it’s healthy.

For instance, you can eat all the organic macaroni and cheese you want…but that doesn’t make it healthy.

Also, be wary of overpriced, marketing-focused grocery stores like Whole Foods. These profitable purveyors of foods claim health and environmental benefits for their trendy products. But you pay far more for their products than necessary.

Indeed, organic produce costs more. And that’s mainly because farmers must spend impressive amounts of attention, care, time, and money to attain “certified organic” status in a rigged system, which brings me to my next point…

2. Buy locally
Generally, it’s far less likely that food from a local farmer will contain GMOs than food from a large commercial farm or supermarket. Plus, food grown within 50 miles of consumption is also exempt from counter-productive federal regulations.

I suggest getting to know the sellers at your neighborhood farmer’s market. The truth is, many farmers at my local market sell produce grown without pesticides…but they can’t afford to apply for federal “organic” status. The same goes for farmers who raise grass-fed beef and free-range chickens.

So, ask around and talk to the farmers themselves. You might be surprised by what you learn. Very often, you can get “organic” and “sustainable” produce right down the street. And it will cost a whole lot less than what you’ll pay at Whole Foods.

3. Avoid soy
Soy was once a great crop and food that made sense for traditional agriculture and for sustenance in ancient China. But today, it’s all GMO. Besides, some of the constituents in soy have been associated with reproductive problems and even cancers.

The only real exception to this rule is if they’re traditionally processed soy products like tofu, tempeh, soy sauce, and kimchi. (Eventually, the Chinese found how to convert soy into a usable protein through processing and fermentation.)

Vegetable oil, vegetable fat, and margarines are made with GMO canola, corn, cotton seed, and soy oils. Instead, use organic sources of coconut, grape seed, hemp seed, and extra virgin olive oil instead.

5. Be careful of corn
Don’t buy foods made with regular corn flour, cornstarch, corn syrup, cornmeal, corn gluten, corn masa, or high-fructose corn syrup (HFCS). As I mentioned in this recent Daily Dispatch, at least 90 percent of these crops grown in the U.S. are genetically modified.

And if you do buy corn products — such as corn chips, tortillas, and popcorn — make sure the package says “100 percent USDA Certified Organic.” Choose blue, red, and other colors of corn over yellow and pale sweet corn.

6. Cut sugars
Don’t ever purchase products that list sugar as an ingredient unless it specifies “pure cane sugar.” As you know, I recommend limiting your sugar intake in general. But it’s especially important when you’re trying to avoid GMOs. “Sugar “is almost always derived from a combination of cane sugar and GMO sugar beets.

Whole fruit and fruit juice are fine — and even beneficial. But only choose juice labeled as “100 percent juice.”

Even most non-organic fruit juices (except for papaya) don’t contain GMOs. However, some manufacturers add artificial sweeteners to their juices, including high-fructose corn syrup (HFCS), which almost always derives from GM corn. So, again, read your product labels.

And this warning also extends to artificial sweeteners as well — especially aspartame, which contains GMOs and is used in products such as NutraSweet® and Equal®. Instead, use organic honey as a sweetener.

Price look up (PLU) labels are still optional in most states. But when they’re used, they can give you a glimpse into how that particular produce was grown.

A label containing four digits means that the produce was conventionally grown.

Five digits, beginning with 8, indicates the food is genetically modified. 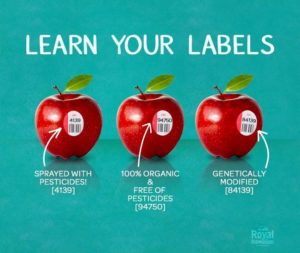 My French grandmother certainly never had to follow all these guidelines when she walked to the local market several times a week to provide healthy, delicious meals for her family. But times are different now. And you must educate yourself. So, stay tuned to my Daily Dispatch and Insiders’ Cures newsletter. I’ll help you maneuver the dangers at the grocery store that seem to increase each and every year.