At this time of year, I give a lot of attention to the annual flu epidemic. But there are many other infectious diseases lurking out there, against which you need to protect yourself.

In fact, researchers with London Metropolitan University in the U.K. recently found harmful disease-causing bacteria on 100 percent of the “self-order” touchscreen kiosks tested at McDonald’s restaurants in London and Birmingham.

I’ve warned you before about avo 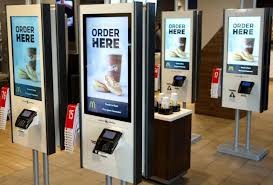 McDonald’s says they’re installing these kiosks to improve the visitor experience. But in my view, they’re ultimately a cost-control strategy in response to the rising mandatory minimum wages imposed by government. In the end, this kind of socialist, governmental control over business results in lost jobs — not higher wages.

And, apparently, it also results in a lot of disease…

Traces of fecal bacteria on 100 percent of kiosks tested

He said they were shocked by how many bacteria were present. And by how many of them are notorious for causing dangerous, hospital-acquired, antibiotic-resistant infections.

The decline of common sense and good manners

Of course, these infectious diseases had once been eradicated in the U.S. with the development of indoor plumbing, improved sanitation, and routine hand-washing.

Indeed, I’m sure you learned at a very young age to wash up before eating and after using the bathroom. When this commonsense rule of sanitation is followed, outbreaks like this simply don’t happen.

But clearly — not everyone who eats at McDonald’s follows this commonsense approach to common courtesy.

Perhaps it isn’t politically correct to follow — much less enforce — the most basic rules of society anymore. I suppose asking someone to wash their hands before leaving the bathroom may potentially “violate their rights.” Or simply hurt their feelings…

They certainly don’t get my business — or my family’s — after the first such experience.

Clearly, some state lawmakers just don’t have their priorities straight. In fact, in Michigan, some looney legislators want to ban Happy Meals® from including “gender-specific” toys, because they’re “sexist,” but don’t appear to be as concerned about basic sanitation and food safety.

Tips for surviving the bacteria found at McDonald’s

As a general rule of thumb, I hope you avoid eating at McDonald’s altogether. Or at least eat there sparingly. Obviously, their food is about as processed as it gets.

However, they do make a good cup of coffee, at a good price — I’ll give them that. And their coffee comes in pretty handy during long drives on highways.

So next time you find yourself stopping into McDonald’s to get some coffee, or into a store with any sort of touchscreen ordering system, make sure to follow these simple tips:

1.) Bring your own stylus (or make one with simple household items) to use on point-of-sale and self-order touchscreens. (I’ve even found that a closed pen will work on many touchscreens.)

2.) Wash your hands after using the kiosk and before eating or drinking.

3.) If you can’t get to a sink to wash your hands, use some alcohol-based hand sanitizer. I suggest keeping a small bottle of it in your pocket, purse, or briefcase. And use it before and after touching anything at McDonald’s.

4.) Regularly sanitize your credit card with an alcohol-based sanitizer after swiping it through a point-of-sale machine or getting it back from an actual living, breathing cashier (especially at gas stations).

Just by exercising proper hygiene and being mindful of the surfaces you come into contact with, you’ll stay healthier and avoid infections year-round.