Anxiety disorders affect 40 million people in the United States, which is nearly 20 percent of the population. But during unsettling times—like now, with the coronavirus pandemic—it’s likely to affect millions more.

So, today, I’m discussing a natural, safe, effective, non-drug approach for coping with anxiety that dates back thousands of years…

Lavender is a hardy, woody perennial that belongs to the mint family. Its practical use in daily life dates back thousands of years to the Mediterranean region.

The ancient Egyptians used it for mummification and as incense. The Greeks and Romans used it widely in bathing and cooking, and even as an antiseptic and disinfectant.

Of course, it was also often used to wash clothing. In fact, the name derives from the Latin verb lavare—which means, “to wash.”

Today, we closely associate lavender with southern France. In fact, you’ve probably seen photographs of the lavender fields in Provence—with row upon row of blooming, billowing, blue-purple flowers that stretch as far as the eye can see. 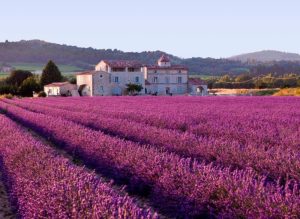 Southern France actually became the epicenter of lavender production during the Renaissance, as local manufacturers used it to treat fine, leather goods—such as women’s gloves—to improve the smell. This practice eventually led to the rise of the modern perfume industry.

During the summer of 1996, I actually visited my grandfather who lived in Provence, France. I remember his companion picked bunches of lavender growing in huge pots outside her windows. She would stuff the lavender into some old blue stockings, which I still keep in my dresser drawers today to keep my clothes fresh.

Of course, as I mentioned at the beginning of this Dispatch, lavender has also been used for millennia to reduce anxiety, insomnia, and stress. And now, even mainstream researchers are looking into its benefits…

One recent meta-analysis of more than 100 clinical trials involved more than 10,000 men and women with anxiety.

Despite these strong findings, the researchers still clung to the idea that more research is necessary.

More than 100 clinical trials found that lavender is a simple, safe, and inexpensive remedy for anxiety. And beyond that—it’s been used safely and effectively for millennia. Yet, for some reason, we still need more research!? (As long as their salaries are paid for by taxpayers, I suppose we’ll get it whether we need it or not!)

But I say, why wait around for more research that we don’t need? People need solutions right now. In fact, I can’t think of another moment in recent history when so many Americans could benefit from a healthy, soothing, natural anxiety-buster.

So, go ahead and enjoy some lavender by diffusing it as an essential oil. (You can learn more about how to pick a quality essential oil in the March 2019 issue of my Insiders’ Cures monthly newsletter [“Diffusing the hype on essential oils”].) If you’re not yet a subscriber, now’s the perfect time to get started!)

Or, you can use it as part of a therapeutic massage, which has its own benefits.

You can also add ground, dried lavender to your baked goods, salads, side dishes, herbal teas, wine, or liquors. It pairs well with both sweet and savory dishes, including berries, chocolate, citrus, rosemary, sage, and thyme.

It’s best to begin with a small amount of dried lavender and slowly add more until you reach your own desired flavor, as it can quickly become overpowering. (For more details about the health benefits of edible flowers, please see the March 2020 issue of my Insiders’ Cures newsletter [“Six flowers that can combat everything from obesity to anxiety”].)