But not everyone enjoys the heat some peppers impart.

Fortunately, there are several easy tips you can use to determine a pepper’s hotness—without biting into it first. I’ll tell you more in a moment, along with a few tidbits about some of my favorite hot peppers.

But first, let’s back up to talk about the many nutritional and health benefits of peppers…

Peppers are packed with nutrients

All peppers—including the green, orange, red, and yellow bell peppers used in salads—are high in carotenoids, which account for their brilliant hues. They also contain lots of vitamin C and fiber.

Furthermore, large-scale scientific studies conducted in places like China (where people eat lots of  hot peppers) link capsaicin consumption with remarkable benefits for health and longevity. And even a study conducted here in the U.S. by the University of Vermont found that hot pepper-eaters had fewer heart attacks and strokes. Plus, they lived much longer than their peers!

I’ve always had a keen interest in capsaicin as a natural anti-inflammatory agent. In fact, when I first started formulating custom dietary supplements 20 years ago for former Surgeon General C. Everett Koop’s company, I wanted to use capsaicin in one of my formulations.

Then, one day I received a frantic call from a confident, young staff member. He went on to lecture me about how capsaicin could only be used topically.

Granted, capsaicin cream is a good, over-the-counter alternative to the popular, foul-smelling, muscle-ache preparations, which act as “counter-irritants” to pain. (In other words, they irritate your skin to distract you from the sensation of deeper pains.)

But I asked the young staffer if he had ever been to a Chinese, Mexican, or Thai restaurant? They routinely add hot red peppers and sauces (packed with capsaicin) to dishes during preparation—and at the dining table…

How to pick your pepper

Eating hot peppers, full of capsaicin, is a great way to naturally reduce inflammation and improve longevity, as those studies I mentioned earlier demonstrated.

So, let’s talk about three easy tips for picking your hot peppers…

I learned this lesson when I was in Thailand in December 1976. I was dining with a Thai government minister whom I had met in Washington, D.C., the previous summer.

At each table was a little pepper tree with many branches. And at the end of each branch, there were tiny peppers. So, at one point, I picked one and put it in my mouth. It was the hottest experience I had in Southeast Asia—at least with food.

Most peppers start out green but redden as they ripen and become spicier. In fact, the redder the color, the hotter the pepper.

Signs of dehydration and stress during growth, such as jagged white lines or wrinkles on the skin, also indicate a hotter pepper.

And, of course, drying out peppers means less water content and a higher concentration of capsaicin.

You can also keep your peppers around for longer by carefully letting them dry out. For instance, you often see strings of dried peppers hanging around at food stands in Latin American and Mediterranean countries.

Go ahead, try this pack of peppers…

Anaheim peppers are light green and mild, but get sweeter and spicier when roasted. 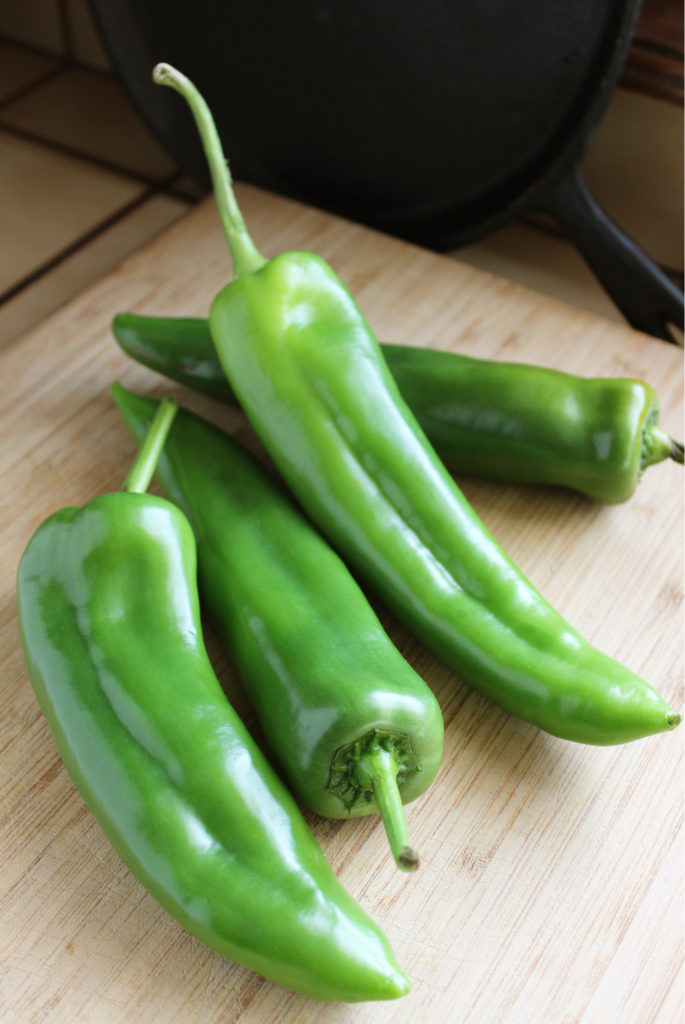 Banana peppers are bright, yellow-green and aren’t terribly hot. But older, more wrinkled peppers can get spicier. You can also find pickled banana peppers, called pepperoncini, in Greek and Italian salads. Banana peppers are good for pickling because the pickling juices can easily penetrate their thin skins. And they make a great addition to a sandwich or pizza. 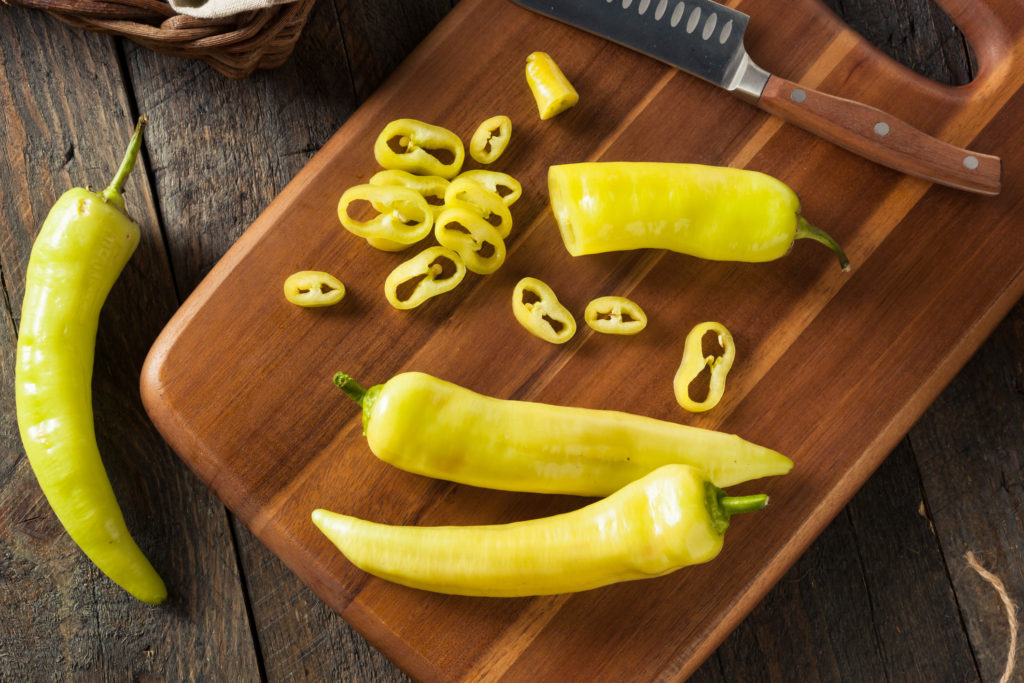 Fresno peppers are bright red, but on the mild side (like most jalapeno peppers). They’re thin-skinned with a smokier, more complex taste. 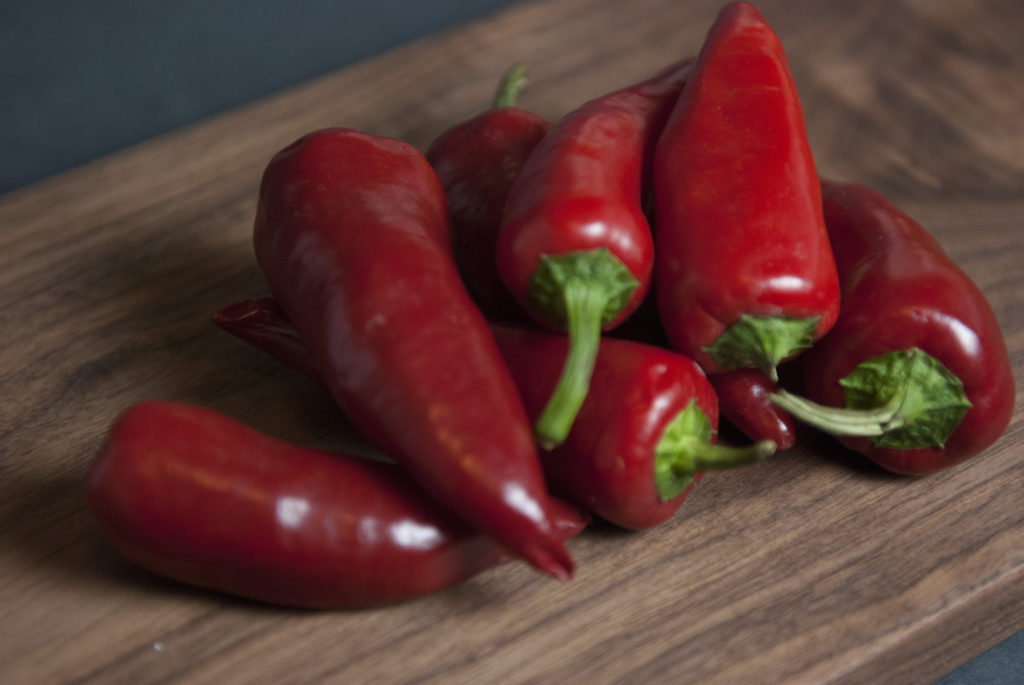 Habanero peppers are little yellow-green and orange-red balls, which are 100 times hotter than jalapenos. They contain a botanical profile that makes them healthy additions to chili, rubs, sauces, and salsas. But a little bit goes a long way with this one. As with all hot peppers, removing the seeds and the pith (the fleshy white part inside the pepper) will reduce the heat of your habanero pepper. 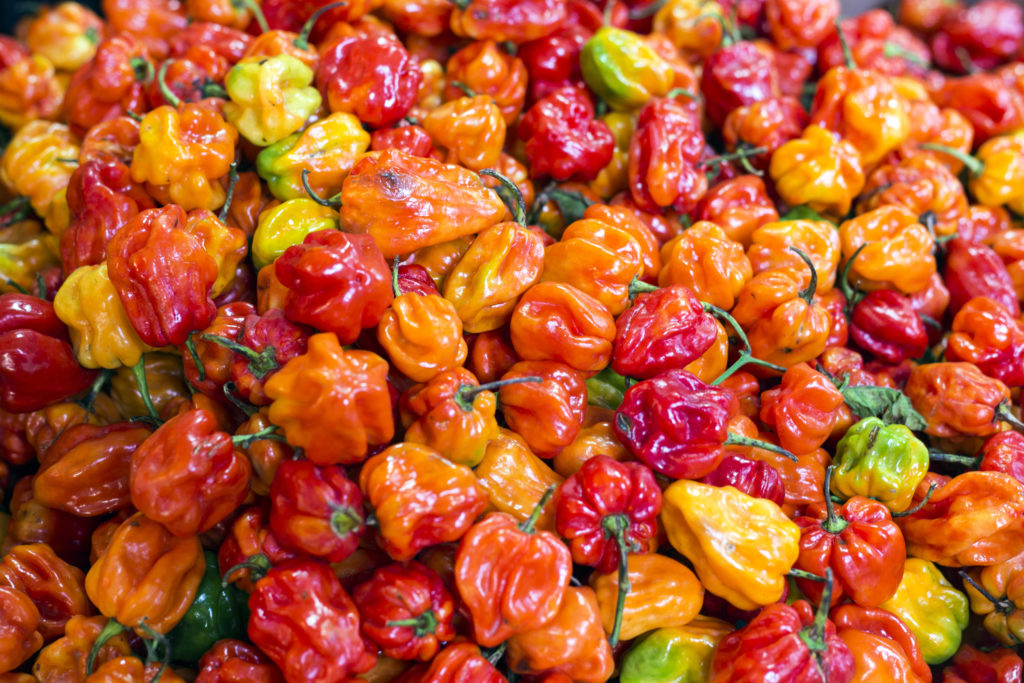 Jalapeno peppers are green and perhaps the best-known “hot” peppers. But be careful—they can range from mild to surprisingly spicy. The younger, smoother, and greener jalapenos are less spicy. But older, darker, drier, wrinkled jalapenos can pack some serious heat. 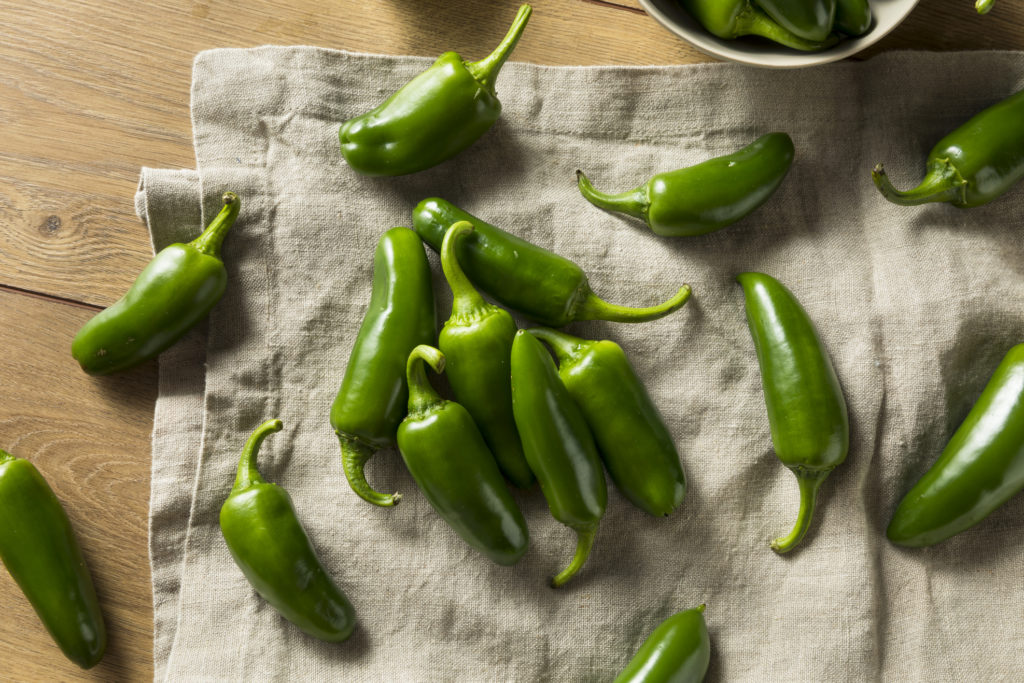 Poblano peppers are dark green with a milder flavor. They’re large, which makes them good for stuffing with cheese and/or meat. And they make a more interesting option than the traditional stuffed green, red and yellow sweet peppers. When dried, they’re called “ancho chili.” 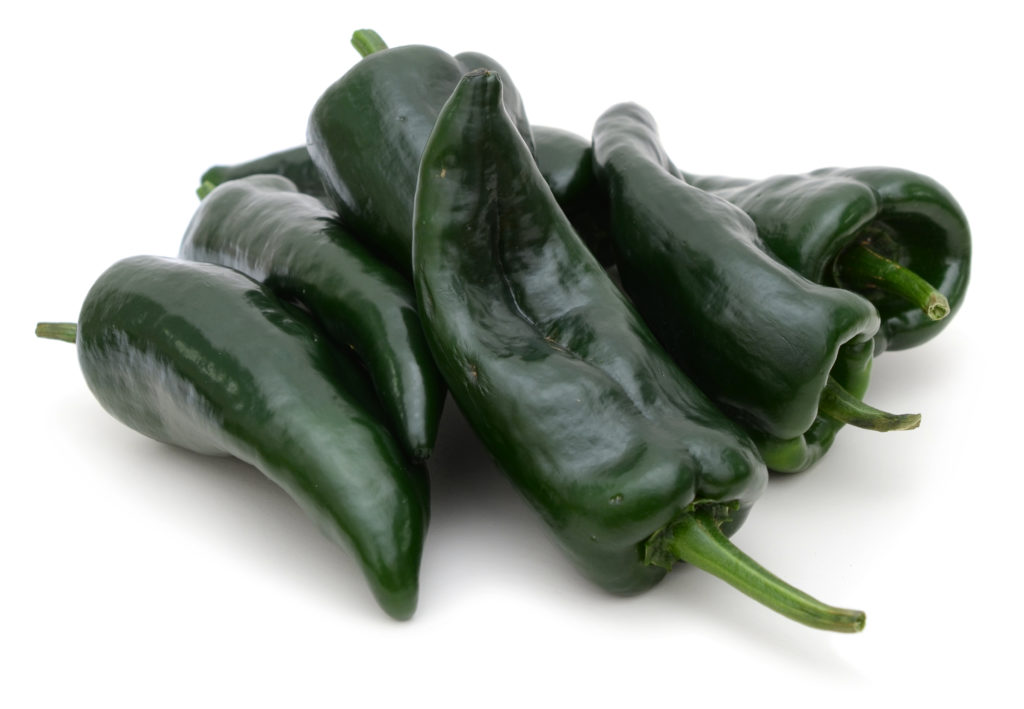 Serrano peppers are dark red and dark green, and are about three to five times hotter than jalapenos. They get hotter when going from green to red. These peppers are long and slim, and you can eat them raw, smoked, roasted, or grilled. 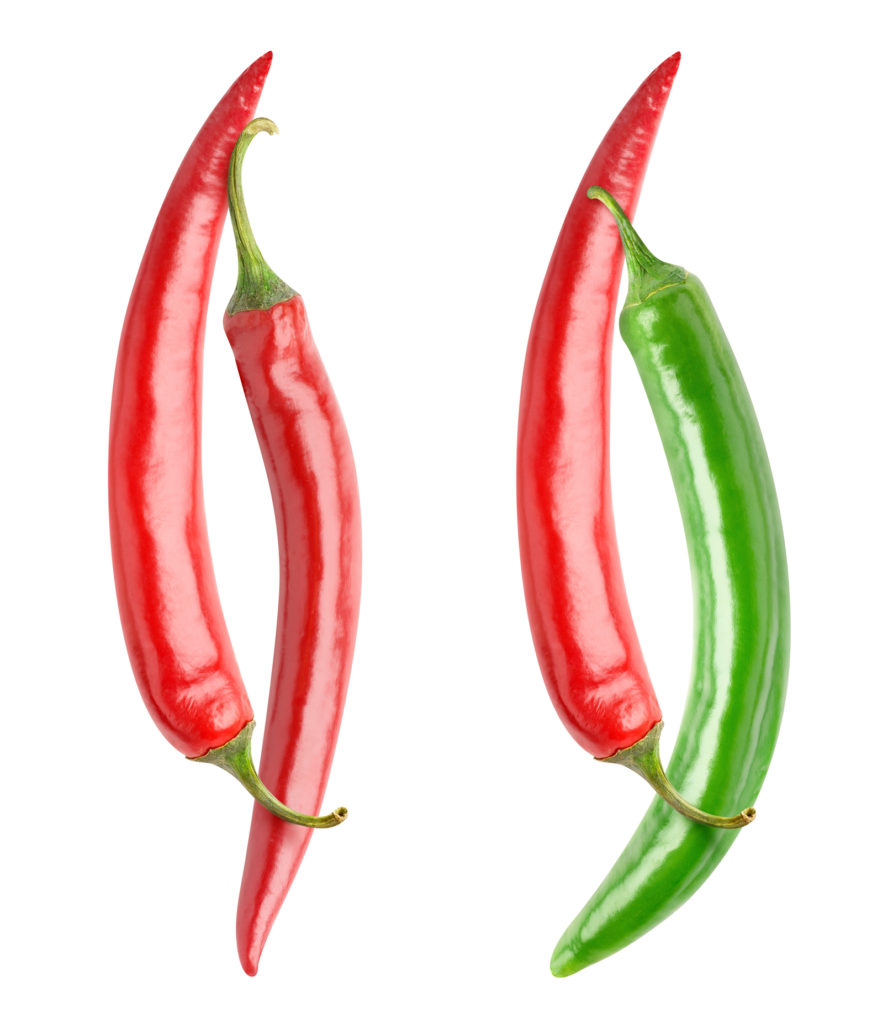 All of these inflammation-reducing hot peppers make the perfect addition to any dish. You can also eat them fresh in salsas or guacamole. (In fact, tune back in tomorrow for my favorite salsa recipe, made with hot peppers, just in time for Cinco de Mayo.) You can even add them to your favorite Bloody Mary!

Of course, there are many natural approaches for controlling inflammation in addition to eating peppers—including exercise routines, medical screenings, nutritional supplementation, and lifestyle interventions. You can learn all about the remarkably fast and easy ways to reverse the #1 cause of disease and aging in my brand-new online learning tool, Dr. Micozzi’s Protocol for Eliminating Deadly Inflammation. Simply click here to get started.

P.S. Join me as I walk you through an everyday anti-cancer plan that gives you all the practical information you need to not only prevent cancer—but survive it. I’m going live with my Cancer Reversal Summit this Sunday, May 5th at 3:00 P.M. Eastern Time. Space is limited, so click here to reserve your spot today!